First day of Radiation for Kathleen as well as a visit with the Pain and Symptom team. Kath is having a lot of difficulty with her back pain. Doubt its the cancer, most likely from the bad sitting as well as not being able to do her exercises that have in the past kept it very well managed. So yet another med to try and deal with a different type of pain. Tylenol works very well, but she cant take that when her immune system is suppressed as it can hide a fever which indicates infection.  Of course being on the radiation table doesnt help her back either.  But she is a trooper!

The photo below was in the Sanctuary where we slipped in to do Gravol.   Episode 2 today.

Kathleen is a very smart woman. Unfortunately, it seems her cancer is as well. As we suspected the FOLFOX was losing its effectiveness. The chemo killed off all the dumb cancer cells, leaving the smart ones. Little bastards. Well, not quite that way but hey, its a metaphor.
It wasn’t the worst case scenario today. Somewhere between least worst and worst. I was fearing he would give the dreaded date range. Instead, we are giving up on the FOLFOX but switching to FOLFIRI. A similar concoction to FOLFOX, but a second line defense. But… Always a but. Her platelets are dangerously low. So 2 week break. Its tough to wait around, but her body is doing its best.
She is also now slotted in for radiation next week on her neck area. Its not curative. Its merely to help with the pain. In 5 days, she will get 80% of the radiation she got over the summer, zapped into her neck area focused on the 2 nodes that have been growing again. Dr. Nuke thinks she will see pain relief within 3-4 weeks and shrinkage in 2 months. In the mean time, I guess more meds to deal with the ever increasing pain.
Sooo….. What does it all mean. I asked the Dr. Chemo what it meant. “Are the changes bad? Is it indeterminate ?” “Its Not good.” is all he said. Really, what else is there that can be said. How not good ? How bad ? Dont know today. We will think about it tomorrow. For now, we have another today.

Oh Yeah, Its ON alright 🙂 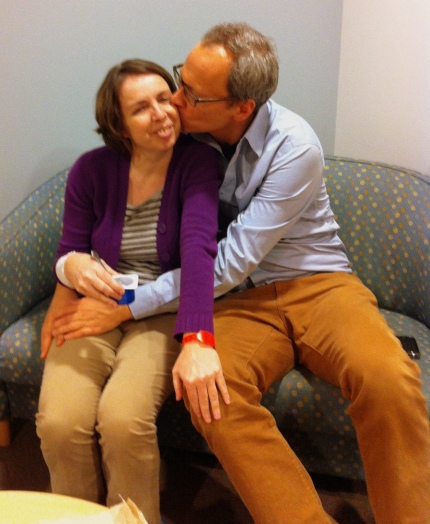 Its been a tough cycle mentally . Kathleen’s main metric for what the cancer is doing (for better or worse) is how the lymph nodes in her neck feel and look. Its not been good. While they initially shrunk, they seem to be getting bigger in the last 3 weeks. But they are definitely hurting more which takes us back to August when the lumps first popped up. Sometimes the sites where the cancer has spread initially respond to the poison… and then they stop responding. We dont know that for sure, but its not a good sign. As a result, we are going back to the radiation oncologist on Thursday to see if anything can be done to help with the pain. Its a bit tricky to zap around the neck as there is too much going on in that region which could be damaged if they are not careful. But thanks to RIM and a whole host of other generous local donors, the cancer center has some great modern equipment here. We also see the chemo oncologist tomorrow. Of course, we will ask for his interpretation / assessment as well. Not feeling very optimistic. But then again, I think I have become numb to optimism and pessimism to some degree. At some point, I think our bodies dial down the amount of emotion you can feel…. or you just reach a point where you become heavier on the stoicism and numbness. We have to, in order to make it through.

Thinking of this great pic of Kathleen from the summer. She was on a 7 day infusion of 5FU while getting the radiation treatments. Despite feeling crappy and barfy and having a chemo bottle connected to her 7×24, she wanted a day at the beach. It was an amazing day. One of my favorite beach days. Ever. More pics of that day with our friends Jan and Diane at http://picasaweb.google.com/miketancsa. They are nice to look at during this winter spell

Round 11 starts Friday if her blood work is OK.

7:15pm
An even longer round today. Still at the H. Kath’s platelets were technically too low to get a full blast of chemo so the options were delay, or reduce the poisons by 20%. OK, reduction then. Her doctor ordered repeats on her blood work to check if things were going in the right direction at least. They were. Platelets were at 68 instead of 66 from the day before. Although is that just in the margin of error ? What does Nate Silver say? Normal person’s is 150. Cut off is 90 for chemo. Kath has done it at 75. That delayed the start until 11 which means we are here until 9pm. Chemo suite usually closes at ~ 6pm. So as not to keep the chemo nurses for 14hours, we are back up on the hospital ward on the 6th floor for the last few infusions. While people look rough getting chemo, you forget how hard up people are in the cancer ward. Kath looks positively healthy in comparison.
We are hanging out in a room with 2 other people. Its not really like the ward rooms from the surgery section. One of the areas here is totally glassed off to isolate a person and the old gal next to us is in relatively good shape. Relatively. They tend to keep the folks with bowl issues at the other end of the hall thank goodness, so there are no overwhelming smells to contend with. But you notice the difference, or at least your brain tells you its different just on the smell. Not that I am worried I am going to catch something, although I had a bit of a scare when peeing. An alarming colour ?!?! WTF !?!? Oh right, I had a big portion of beet salad for lunch 🙂 No, I worry of course if Kathleen will be here again. not short term. Not due to side issues like infection. Hmmm. I still find it a little hard to write the words. Will Kathleen be here because of the cancer to die in the near term ? Of course the worry is there. I find it better to look and define those dark places than leave them unsaid to fester. Scary monsters are worse when they stay in that poorly defined part of our imagination.
Around round 5 or 6, I remember passing a guy in the hall who was asking a nurse where his wife was. “I got a call saying my wife had slipped into a coma. Is she here, or upstairs?” He was so calm and matter of fact about it. Younger than me. Maybe mid 30s ? I am not there yet. Do you become numb to it all, or do you have some sort of calm acceptance like that? Maybe it was taking every ounce of energy to hold it together. But I remember back last April, I could not even say the words, “Kathleen has cancer” without breaking down. I am thankfully not on the same part of …. I want to say, ‘road,’ but its not a road. More like a spot on a conveyor belt. If it were a road, I would get the hell off at the next exit! Hopefully the belt will dump us out well before where that guy was with his wife.
Two more rounds to go. Kath is a little worried her nodes are getting bigger. Her neck pain has been back a little and she has more tenderness around her liver area when we were meeting with the Pain & Symptom team on Wednesday. But not so much the next day. When its the cancer, it doesnt get better like that. While worrisome, I think we are getting a little better at living with bad signs as it didnt seem to freak us out as much as it used to. I think thats a good thing as it allows us to have some normality in our lives. Although sometimes I think its like the engineer coming to the bridge of the Titanic, “Captain, we have a fire below deck”…. Bigger things to worry about. Actually, we dont yet know if our boat is called the Titanic. Hopefully its called ….”THE LOVVVVVVVVE BOAT”!!! Haha, I put that awful song in your head!
Yes, we still talk and try and laugh about everything. Everything 🙂

Having a laugh about the Love Boat at the Hospital