Its been an odd path for Kathleen this week. The chemo has generally been much harder on her with each treatment and she seems to go to a much darker place physically just a few days after treatment. But the following week she seems to bounce back better than ever. She had a few days this week where she only had half a bag of gravol which hasn’t happened since the start of radiation back in June…. Hopefully its not an elastic band that will snap!

Emotionally it was a bit of a roller coaster as well. She was glowing with happiness from her visit to her office xmas lunch on Thursday. She misses work and especially the people she works with. On the down side, we went to say goodbye to our friend Paulo this week who lost his fight with pancreatic cancer…. That was a hard visit in many ways. To see Paulo so weak and frail, a soul who was so full of life, was very hard on its own. He was only 40. Ironically he was in the room next to the one our friend Pat was in at Lisaard House — a hospice in Cambridge. It had been a few months since we last saw him and the cancer had taken its toll far more than we could have imagined. There was not a sinew of muscle left on him at the end. It was hard to see him like that but I am glad we were able to see him one last time. Of course the thought crossed both our minds…. Would we one day be checking Kathleen in here as well. Its a very, very good thing there are places like Lisaard House to help us in those final days. I just hope we will be both old and ready.
Chemo day was a long one today. I had sent out an email to my sister saying how Kathleen was almost through the Oxaliplatin without any side effects when…. Oh well. Turned into another 9hr day. But really, pretty uneventful which is better than eventful! 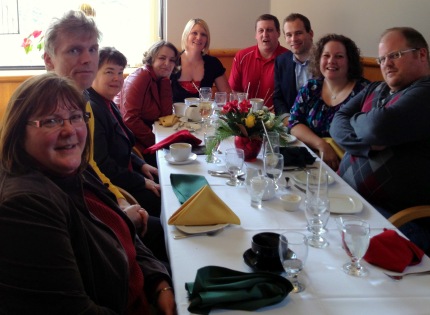