Its never fun going to emergency. Of course its somewhat self evident in that you are there because of some emergency. I thought we would be ok if we went at 4pm since all the clinics are still open and being a weekday the family doctors are still about. Yet surprisingly busy. But since kathleen comes pre-diagnosed, its all fast tracked. Took 2min to be triaged and after that we were put in a different waiting room since her white blood cell count is near zero from the chemo and she could not fight off simple bugs that would be flying about in the main waiting area. About 20min there and then a bed. Very friendly staff tonight. I get the sense not just because they know Kathleen is a ‘legitimate’ patient, just that they are nice. While in triage I could hear the nurse assessing an angry junkie. Its a tough job and she was doing her best.
So here we are again in an all too familiar room in emerge… The tables, the iv trees, the hand sanitizer dispensers . I am an information pack rat by nature, but it bothers me that I know where everything is, what everything is. But I guess that helps in a way. Every day in general is a mix of familiar and change. I can do familiar. When Kath gets better, its familiar. When she gets worse with the usual symptoms, its still familiar. But new… that is always hard. So it makes it a little easier to deal with new when much is familiar at the hospital. Less shocks to the system that way I guess. Even sitting here next to kath in an emergency bay is… Familiar. Like a nurse said near the start of all this, you acclimatize
In her cycle, today is normally a low day for her. But new things. A new pain in a new location. Vomiting that we could not control and then a fever. Called to cancer center and they were quite adamant to go in for tests. Either infection or bowl perforation which the avastin (chemo drug) can do. Fever alone can be very dangerous since the chemo wipes out her immune system. So combined with the other things, it wasn’t that hard to decide to go…. Xrays done. More waiting

Update at 11pmHome again! Nothing drastic, but the xray was indeterminate. So more imaging tomorrow and a visit with the cancer center team. Also ran into a nurse that Kathleen had while in the surgical ward who is now in ER. I forgot home kind and amazing some of those folks are. 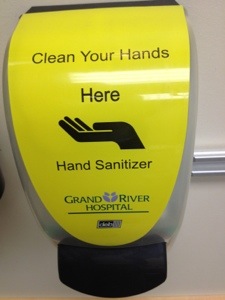 9 responses to “Back to the familiar and new”