Aka clip episode, aka recap show.  We kind of feel like we are in one right now.  You know those episodes on TV where the cast members are “trapped by an [earth quake|winter storm|power outage|Alien invasion|in prison|illness] and they reminisce about events past and speculate about the future.  Hollywood will do them typically at the end of a season when budgets are tight or if a main cast member is away for whatever reason and they need to be written out that week… So you have flashbacks and clips of previous episodes somehow woven into a ‘mostly new’ episode. Kind of feel like that right now.  Not too sick to be in the hospital, but feeling crappy enough not to venture out of the house very much and trapped in doors for the most part.   Thinking of times past and trying to look hopefully to the future.

It was nice to spend the day home with Kathleen today and take her on her errands.  She was feeling a little better compared to yesterday.  Still, she has some nasty breakthrough pain in her shoulder and neck which is rather worrisome.  Her CT is supposed to happen well before her next appt with her chemo oncologist which is the first week of Sept. Will the mass be smaller/bigger/gone on her pancreas ? Is it just a pinched nerve in her neck ?  A season one cliff hanger.  Will have to wait for the season 2 opener to find out.  Hopefully it wont be one of those annoying shows where all is not resolved.  Oh right, this is reality 🙂 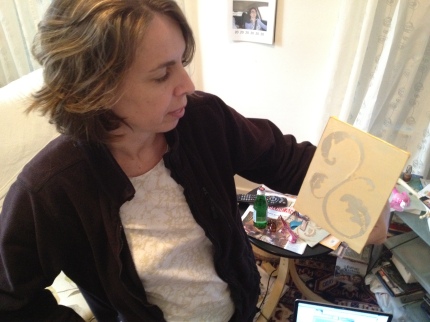 Some lovely artwork from Kathleen’s sister